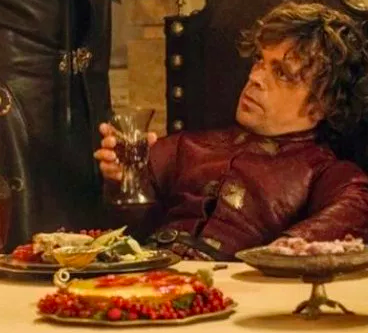 Unfortunately, just like winter, the end of Game of Thrones is coming. In preparation for the finale I am going to give you some tips on how to throw the ultimate viewing party. Mostly what to snack on throughout the 80 minute finale.

Now, there are two ways that you can feed your guests when watching Game of Thrones. The first would be a full medieval feast with turkey legs and bucket loads of ale. The second would be ever so slightly kids birthday themed with many snacks. I opted for the latter and put my baking hat on for the day.

Here’s what I came up with.

First up were the savoury options. Personally, I think every platter needs bread and hummus, Game of Thrones themed or not. If we cast our minds back to Season 3, they do actually eat bread at the Red Wedding (pre-massacre), so technically we are on theme here.

The other savoury option is an ode to Petyr Baelish, in the form of fish fingers. Baelish is commonly referred to as Littlefinger throughout the series, so in honour of that I included fish fingers as a snack.

Onto the more exciting options – the sweets! Firstly, I decided to tackle the cake pop and create Ned Stark’s head on a stick. I used icing pens for the details and threw some red food colouring on the stick to recreate his death back in Season 1. I warn you now, cake pops are not for the faint hearted so be prepared to spend a lot of time on these! Hence why some of mine are not on sticks and look like squares, rather than a human head!

Now, there cannot be a Game of Thrones party without some kind of dragon egg baked good. I went with shortbread, not only because it is super easy to make but also to symbolise Tyrion Lannister. This is definitely a good idea if you don’t have a lot of time, as shortbread only requires three ingredients! You can also get icing ready made in a pen, which is great if you’re creating something last minute.

To represent the White Walkers and dragon glass, a.k.a. the future of Season 8, I threw together some jelly cubes as something a bit fun. Also, a great excuse to relive your childhood and eat jelly! The trick to keeping these in shape is adding extra gelatine and a silicone muffin/ice tray. If you’re wanting to make your party a boozy one, you could also add vodka to these to make a White Walker jelly shot!

Finally, I popped bunches of grapes around the outside as a palate cleanser/snack for those who are #health.

As it is finally starting to get colder here, I decided to provide mulled wine as the drink of the night. Everyone makes theirs a bit differently, but I just had a cheeky Google and threw everything in the slow cooker (who doesn’t love a slow cooker?!) for the day. Don’t forget the cinnamon and some citrus fruit. Personally, I used the Mulled Wine Magic loose tea from T2 to save buying lots of ingredients.

In terms of actually watching, you could have a bit of fun and make your party a dress up. I might do this for the finale, but for now I bought a four dollar costume from K-Mart and dressed my cat up as a dragon (yes, it is a dinosaur costume but this is the closest I could get!!).

Costumed or not, snacks are an essential to get your group through this final season and the shit storm that is going to hit over the next few episodes. So sit back with your snacks and enjoy! We can then decide what to do with our Monday nights once it’s all over.