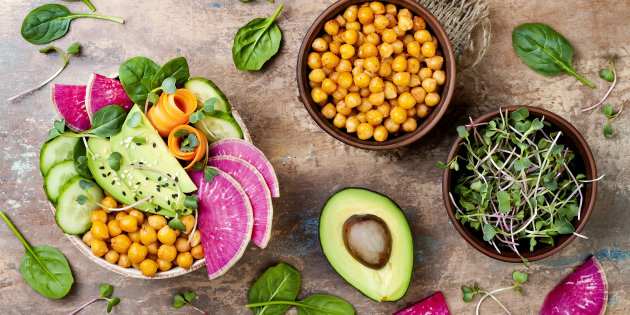 Kiwis are changing up their lifestyles and ditching the typical meat and three veg, instead choosing to go for a more plant-based diet in hopes of maintaining a healthier way of living and helping our environment.

Michael Kemp, a twenty-year-old university student made the switch to cut out meat and dairy two years ago in his last year of high school after getting involved in the Young Enterprise programme.

This saw him create ‘Appetite Aotearoa’, a cookbook filled with a variety of vegetarian recipes from famous people in New Zealand including politicians, chefs, and athletes.

After doing research and talking to nutrition experts in the community, he was convinced eating meat and dairy were bad for both his health and the planet.

“I had just turned eighteen and was an avid lover of meat my whole life,” he explains, “after doing a bit of investigating, I realised my body just didn’t need it”.

While he found giving up meat and dairy a challenge, the toughest thing was dealing with the reactions of other people, including his own family. “They don’t like it. They find the whole idea ridiculous and weird. For them, it’s not the norm,” he says.

Then there’s his carnivorous flat mates. Michael will still cook meat for them, but there is generally a lot less of it. These days, a go-to dinner is a Buddha bowl filled with avocado, cabbage, broccoli, edamame beans and brown rice. “It’s a healthy, nutritious bowl of goodness that still keeps the flatties happy!”

Michael doesn’t consider himself a vegan – he still wears leather shoes – and doesn’t claim to be perfect. “Moving into my twenties and living away from home, I just want to be as healthy as possible,” he says. “I realise that still being young means I need to start focusing on my health for the future.”

He is not alone with his plant-based diet. 42% of all vegans are aged 15- 24. This has been documented by the Teen Vegan Network, a social network for the plant-based, who has watched this trend with interest. Last year, their first summer camp sold out in 34 hours and this year saw 150 young people on the waiting list.

Finn Ramsay, who is a part of the Veg Club of UC and works part time at Cafe101 has also noticed this trend. He says, “a few years ago, vegetarian options were never really popular. Now we see a lot of Uni students choosing plant-based food and looking for meat alternatives”. Finn’s sentiments echo the trend that has hit NZ youth, in which we are becoming more ethical about our eating choices.

“This is definitely a new trend and one that is good to see. Before this, vegetarian options came in the form of a salad and were severely lacking. Now there are so many great, diverse options you don’t feel like you’re missing out.”

So, should we all be following Michael and Finn’s footsteps and changing our diets to 100% plant based?

It is no secret that consuming processed meat is bad for us, such as bacon, salami and sausages. They are classed as a Group One carcinogen by the World Health Organisation.

There is strong evidence that diets high in red meats, such as beef and lamb, can increase our risk of cancer. For example, in Japan, a significant increase in consumption in recent times has led to a steep rise in the rates of bowel cancer. There are also other negative side effects from a meat-heavy diet with all the saturated fat being bad for the heart and arteries.

However, when it comes to nutrition, red meat can pack a powerful punch. It is the best source of haem iron, provides us with all the essential amino acids and is rich in vitamin B12, which those following a plant-based diet have to get from fortified foods or supplements.

Then there are the ways in which eating meat is damaging our environment. Huge amounts of land and water are required to farm animals, and this can cause deforestation and water pollution if effluent seeps into the waterways. Beef farming produces greenhouse gases which also contribute to climate change.

Suzy Amis Cameron believes she has a solution. The former actress and wife of director James Cameron changed her diet to a plant-based one overnight, but knows such a drastic change is not for everyone.

So, Cameron is spearheading the One Meal a Day movement.

She is convinced that changing one meal a day to a plant-based one can make a positive difference for our health and the environment. She points out on her website that, “every time you put something on your plate, you’re making an impact. Just one person eating one plant-based meal per day for a year saves 200,000 gallons of water and the carbon equivalent of driving from Los Angeles to New York. If enough people did it we could help shift the needle on climate change”. Her aim is to drive home the message that each individual can make a difference.

By 2050 it is predicted that there will be 10 billion people on the planet and 50% more food needed. Greenhouse gases, however, will have to fall by two-thirds according to a recent report by the World Resources Institute. This means reducing meat is essential not only for the planet right now but for our future selves.

It won’t mean missing out on deliciousness, promises Michael Kemp. “You can still satisfy your cravings through treats and getting plant-based food has become easier than ever in supermarkets and restaurants. I don’t feel like I am missing out on anything. In fact, you might end up realising, like me, there is a lot of good plant-based stuff to eat”.