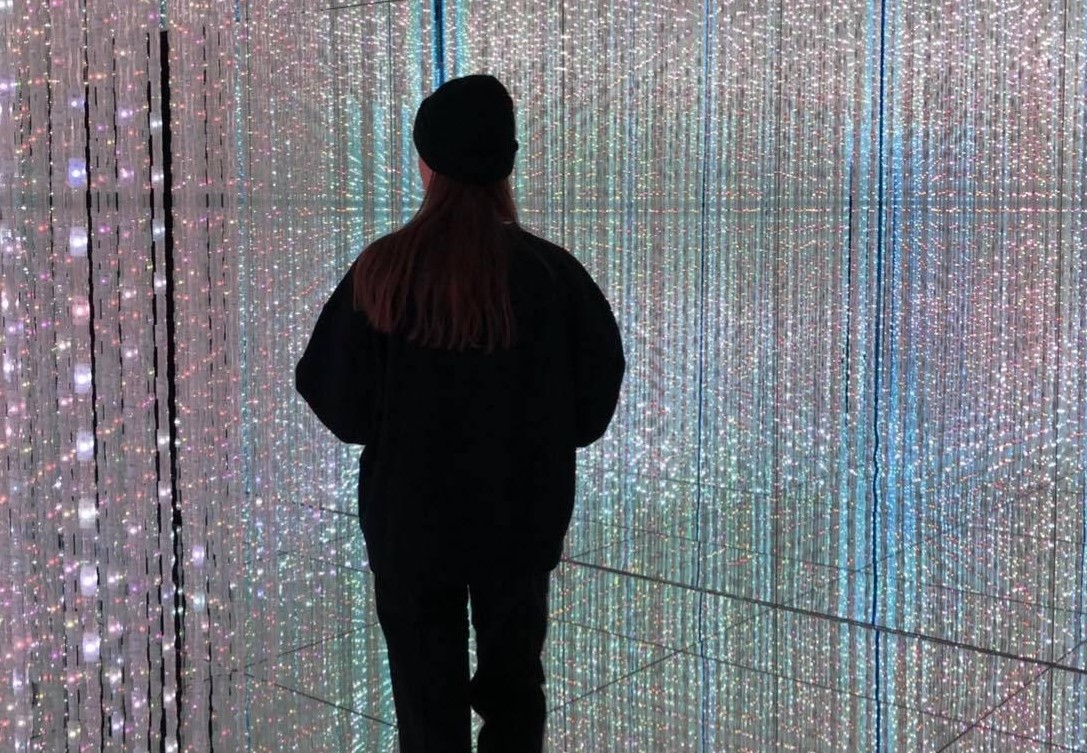 My heart beat with anticipation as I navigated my way through a tight, pitch black corridor.

The small hallway was covered in a soft material and the surface was uneven. It was similar to walking over rolling hills but on a far smaller scale.

I was a part of a group of 20 people struggling to find their feet as we were forced to use our touch and hearing over our preferred sense of sight.

Leading the pack, the only direction I had was the music playing softly in the distance. When I reached the door at the end, the environment I met with on the other side exceeded any expectations I may have had.

I entered a dark room with mirrors covering the walls and ceiling.

At the beginning of the tour we were told to take off our shoes and roll up our jeans. I thought this was a strange request but after entering this room it made sense.

The most enticing and beautiful part of the setting was the floor. I was knee deep in milky coloured warm water, while colourful koi fish were projected onto the surface.

In more technical terms, I was standing in an interactive pond, surrounded by computer generated aquatic life. I was completely immersed in a peaceful fantasy, a vivid and sensory experience like no other.

Digital art collective teamLab is a Japanese company based in Tokyo and has two locations across the city. It was founded in 2001 by Toshiyuki Inoko, shortly after he finished a degree in physics and mathematical engineering. The museum certainly reflects this, it is an environment that combines art and science, redefining the line between art and technology.

Modern day perceptions of technology can often leave people feeling disconnected from their environments. teamLab Borderless changes the way we think about the digital world and its negative impact on the individual.

Completely reliant on technology, the installations in the museum are exceptionally wholesome and inviting – much like the Japanese culture.

The dream-like settings allow people to be in complete darkness then suddenly in a room full of small crystal lights. It is the ultimate balance between fantasy and reality, utterly unique in its execution.

Japan has an exceptionally advanced society; it is a country where any concept, idea and dream is achievable. The condense, urban environment looks like something out of a video game, due to the vibrant technology and crazy screens built into the buildings. It has the most breathtaking infrastructure, efficient public transport system and flawlessly dressed public I have ever seen or experienced.

9.2 million people live in Tokyo’s concrete jungle, yet I still felt completely safe and a part of everyday life. While being in the most contrasting setting to Christchurch, I found the wholesome Japanese culture to be so inviting and special. It is a truly amazing example of the infinite possibilities of society and different ways of life.

I had never seen so much visible happiness from a group of complete strangers before visiting teamLab’s digital art museum. No reproduction, photo or video will ever do this concept justice.

If anything, the time I spent here reminded me to be present in my environment and to ironically ‘live in the moment’.