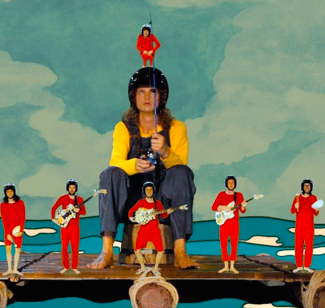 It’s always an exciting moment when Spotify emails you with the news that one of your favourite bands has just released a new album, and even more exciting when you see that that band is King Gizzard and the Lizard Wizard.

‘Fishing for Fishies’ is King Gizzard’s first album of 2019. It comes after a year long hiatus following a hugely productive 2017, with the band dropping five solid albums in a single year.

King Gizzard has yet again failed to disappoint, with another entirely new concept that still contains the psych-rock-Lizard-Wizard feel that has been present in all their albums thus far.

‘Fishing for Fishies’ takes you on an eco-boogie rock journey, taking influence from blue-boogie rock legends such as ZZ-Top, Canned Heat, and Humble Pie. The jovial melodies of the album are accompanied by fantastically strange lyrics; they sound as if they were concocted from the mind of an environmental activist cooked out of his mind on psychedelics. And it’s great.

The album is filled with bangers that’ll make you boogie, a lot of which state just that in the title, so you know what you’re in for. ‘Plastic Boogie’ tells us that our excessive use of plastics is destroying the environment, while making us groove to a Led Zeppelin-esk drum beat and driving guitar licks, finishing with the definitive message “fuck all of that plastic.”

‘Real’s not Real’ is one of the strongest songs on the album. It combines the raunchy hard- rock feel of bands like AC/DC, accompanied with melodies you’d expect to hear if you went to a Disney musical. Despite how unusual it sounds, this combination, or at least how Gizzard pulls it off, works brilliantly and in fact gains the privilege of being one of my personal favourite tracks on the album.

The title track, ‘Fishing for Fishies’, is probably the weakest song on the album, confusingly as it boasts the same name as the album itself. It is starkly different to the rest of the album, with it having more of a psychedelic folk feeling to it rather than boogie rock.

The song pairs breathy, falsetto vocals with a twinkly guitar backing, I guess in an attempt to emulate the feeling of wee fish swimming around the ocean, but instead ends up sounding like something produced by Hi-5 if they were commissioned by PETA for an experimental rock song, swaying public opinion on recreational fishing. The message may have some merit, but the song itself is just plain annoying.

The final track on the album ‘Cyboogie’ tells the story of a depressed cyborg, with a serious case of chorophobia (fear of dancing). It’s a synth heavy, psychedelic rock song that has a retro-futuristic feel to it, cleverly managing to sound classic and modern at the same time. King Gizzard takes the song through various phases, whilst keeping it interesting throughout its almost seven minute span.

Overall ‘Fishing for Fishies’ is a blessing to the ears and still voices a good message. It is also conveniently one of their most accessible albums so far. So if you are looking to delve into the Gizzverse, this album is well worth a listen.