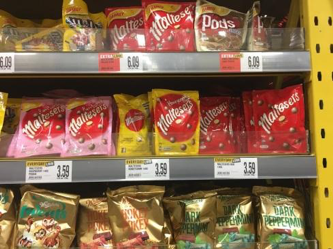 You may or may not have noticed, but Maltesers have released some new flavours – raspberry and honeycomb! The original Maltesers were released in New Zealand in the 1990s and have since become one of New Zealand’s most favourite chocolatey treats. Maltesers are the sort of treat that kiwis cannot stop munching on and are perfect for many occasions.

These new flavours were released around the world a while ago, but have only just reached the shelves in New Zealand recently, so now I am going to give them a try!

I’m also a bit disappointed that no part of the Malteser is coloured pink or red to resemble the colour of raspberries. The flavour also gets lost after you’ve had a few of these. I’m really not sure what Malteser was trying to get out of making raspberry flavoured Maltesers in the first place. That being said, I could not stop eating them, so they must have been pretty good.

Next I tried the honeycomb flavoured Maltesers and I think they might just be my new favourite thing! Honeycomb Maltesers were introduced in Australia in 2017, but now they’re back and on New Zealand shelves!

As soon as you open the packet you get hit with a waft of the sweet honeycomb smell, and boy was I intrigued! Compared to the regular Malteser, the honeycomb flavour has a little more crunch to it, with bits of honeycomb mixed in with the original malt centre.

Both the raspberry and the honeycomb flavoured Maltesers are still, however, scrummy and very moreish, just like the original Maltesers. Maltesers are also under the Fair Trade regime, so if you’re into responsible agricultural practices, these new flavours might just be the treat for you.

If you’re looking for a new, simple, and delectable treat to scoff as you study for exams, or just for watching a movie, I would certainly recommend you try these!

Keeping the Youth in the game – How are the youth of today becoming...

Educators TV Show – What You Need to Know