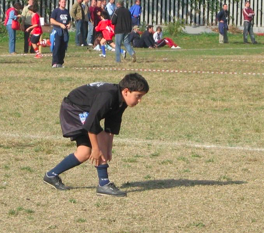 As the unwelcome winter slowly sinks in, many Kiwi sports fans are gathering around their televisions to follow the events of the winter sports season. New Zealand’s massive sport culture is probably one of the main things that attracted me to this country and was definitely the catalyst for the biggest and most dangerous decision of my life, to drop everything and move halfway around the world to pursue sports writing at UC.

I am convinced that I wouldn’t be here today if it hadn’t been for the strong meaning that sport carries back in my hometown. In Milan, a city in the north of Italy, sport represents much more than simple physical exercise: it is rooted deep within our society and culture. This might be part of the reason why having one professional football club already representing the city on an international level wasn’t enough.

When I first arrived in New Zealand, I thought that as far as fan bases go in sport, almost everyone here would be a devoted rugby enthusiast and supporter. To my surprise, I actually noticed much more interest and general excitement among young adults and children towards nearly any sport but rugby.

Based on my observations, I concluded that over the last decade, rugby in New Zealand has been experiencing changes not unlike what football is going through in Italy.

While rugby and football both remain the most popular sport in their respective countries, many other sports are rapidly gaining popularity. Apparently, while Italian kids slowly grow more and more tired of seeing nothing but football every day and are showing interest in other sports, so are the new Kiwi generations by relinquishing the oval ball and shifting towards new disciplines.

On multiple occasions, I’ve noticed A.C. Milan and other football jerseys on the backs of New Zealanders rather than All Blacks ones. Seeing people wearing a jersey from my hometown on the other side of the world makes me smile, and helps me realise that the interest for international sports teams and competitions, even those with no particular New Zealand representation, must be growing. It seems to be particularly apparent in the 18 to 24 year old age group.

I was introduced to rugby at an early age, after many attempts by my mother who I now thank every day. I am glad I started so early because practicing this discipline for 15 years has given me plenty of time to appreciate the sport and fully comprehend its greatness.

While both Italy and New Zealand take pride in their respective sport cultures, they differ from each other in almost every aspect, in fact, they are almost the opposite.

Without social media, most sports fans used to rely on either mainstream TV channels or word of mouth to keep up with their favourite competitions and teams. The chances of someone seeing or hearing enough about rugby to spark the interest to give it a try were slim.

As you may imagine, many kids who did discover rugby and want to try it usually did so  once they were already grown up. It is much more challenging to teach something to a teenager, than it is to a younger child. For this reason, the quality of the game was never the best among high school teams, but it didn’t matter because everyone was there to have fun, and occasionally release some suppressed anger. If we also managed to secure the win, even better.

When it came to playing the game, I never had much going for me on the natural talent side of things, so if I wanted to win it came through hard work in practice. As one of the kids that had been playing for the longest time, I did eventually end up picking up a skill or two that on occasion turned out to be useful during a game. But no amount of training in the world could have prepared me for playing in arguably the most feared and respected nation in the rugby scene.

When I first stepped on a rugby ground on this side of the hemisphere, every ounce of confidence I had in my skills quickly dissolved, leaving me disoriented and concussed.

Landing in Christchurch, ready to start my rookie year at UC, I knew that I wanted to keep playing rugby, but I was even more conscious of the fact that I couldn’t let anything put my studies in jeopardy. So I joined the division three University team, unrealistically hoping I would be able to dedicate Sundays to studying and not worry about game day residual pains.

That didn’t happen. Div. 3 turned out to be much different than I expected, not necessarily in difficulty but rather in the abilities throughout the grade.

This is when I realised the main factors which I believe have contributed to making New Zealand the rugby shrine it has become. Here, children are exposed to rugby from a very young age, mainly through school.  With positive reinforcement it is likely that many kids will end up learning at least enough to pick up the basic skills needed to play the game.

In Italy on the other hand, it is more likely for kids to discover rugby much later, meaning that even if they are talented individuals, they lack basic passing, tackling and positioning knowledge. This, combined with the fact that there is no such thing as school sports or school teams as New Zealanders know it, only clubs, makes for far fewer adept athletes.

On the international stage, such differences between countries can be seen when looking at world rankings. The All Blacks have been dominating for as long as I can remember, while poor Azzurri have been struggling to crack the top ten.

While the way rugby is played on the field between Italy and New Zealand is radically different, the laughs, conversations and environment in the club rooms following a tough game are all too familiar, and that remains one of the most beautiful things about this sport.

All in all, if a stranger tells you they play rugby, it doesn’t matter where you are in world, it is likely the individual standing in front of you will relate and be as respectful and kind, and will probably be happy to try and drink you under the table if you dare challenge them. Rugby has created this worldwide community, a special connection of sorts: a unity, a culture.

Rugby opened many doors for me and let me do things I never thought I’d have a chance to. Because of rugby, I am slowly falling in love with all sports and I am genuinely convinced that Canterbury’s sport culture will only help my passion grow. I am here to learn from the best, not just how to move on the field, but how to make rugby as successful as it is in helping and inspiring people to make positive changes in theirs and others’ lives.

Ultimately, I believe that sport, through the values it teaches, has the potential to improve our quality of life and motivate us to do better as human beings. I want sport to help others as much as it helped me and I cannot think of a better place to start from than here.