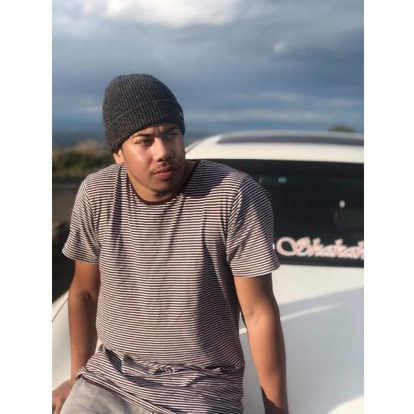 It’s 5:50pm on a chilly Monday evening. I am patiently waiting in front of my house to be picked up by my friend, Ken, a huge car fanatic who is also my interviewee.

This is actually our normal routine for a Monday, going for a cruisy drive to the park or to church for our youth practice. Today though, I thought I would use the opportunity to sit down with him and have a talk about his love for cars and racing.

After a little while, the loud sound of a rumbling car engine can be heard coming down my street, as Ken pulls up in his Nissan Skyline.

Draped in a pearly colour and housed with a spotless interior, the vehicle contains a lot of bells and whistles only a car geek could dream of. It is fair to say this car is a majestic beauty, one to be proud of.

Getting into it, he tells me how his interest of cars came about when he was just six or seven years old, where he would watch his dad fix cars and learn to identify the parts and their functions. He also reminisced over the moment he first touched a steering wheel, speaking of his grandads truck back home in Samoa. I imagine this to be quite different to the 2009 four door Nissan Skyline 370gt we were sitting in.

If you think that descriptive title is quite impressive, you should hear the roar of its V6 Tiptronic engine. Through this, it is clear to see the extent of Ken’s passion for cars. He spends roughly $100 – $150 dollars monthly on the detailing of his masterpiece.

But while it might sound all fun so far, unfortunately racers don’t always get the bright side of things. It isn’t uncommon to see headlines of racers being described as hooligans, annoying, a disturbance and so on. A write up by Newstalk ZB earlier this year described boy racer events as ‘disruptive’ and ‘unsafe’ for members of the public. It seems every article in the media has a negative viewpoint on boy racers.

We dwell on the more serious questions throughout the drive, as we stop on Bealey Ave, a common meet up place for racers. “We aren’t a bunch of hooligans who drive around [with the intention of] annoying citizens of Christchurch,” Ken states.

“It’s about showcasing your personality in your vehicle and showing your passion and [the] sweat put into your car. Most people show their passion in cooking, fashion and other hobbies… for us, its cars.” This is a fair point.

Instantly, another bunch of cars in small groups pull up next to us. It is visible to see the brotherhood and family vibe these groups bring to many young people here, a sense of belonging for some. “We are all one big family, different cultures, race and religions but [with] one common interest.”

He then continues to say how people should learn to know the racers before judging them. For Ken, it’s about being accepted in society in his own ways and fitting into a community that shares the same passion as he does.

Surrounded by like minded individuals, we have the night ahead of us.

As the lights turn green, we speed off alongside three or four other drivers, leaving the rest of the world mercilessly behind as we zoom into our own space of freedom. Speeding past the bumps, the obstacles and the stereotypes.