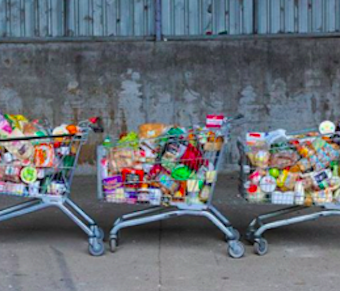 Food waste is a critically important global issue, but is one that we can work on individually and within each household. It has been found that 229,002 tonnes of food is sent to landfill by households annually, with about 50% of this being avoidable. This is not suggesting we set an expectation to rid every household of all food waste, but instead highlighting the fact that 122,547 tonnes of this yearly food waste is actually avoidable. How many times have you cooked a meal for your family or flat mates, and had leftovers in the fridge that have stayed there until the smell became so unbearable they had to be thrown out?

This issue is so prominent that the food wasted by the United States and Europe alone could feed the world three times over. Bringing it back to home in New Zealand, the amount of food being wasted annually could feed the population of Dunedin for three years. Those accused of being the worst for this are millennials. We live in a fast paced world and are only now beginning to understand how impactful each of our actions can be. Let’s start making these actions as positive as possible. It is easy when we waste food to see it as this.

“just half of a loaf of bread that went mouldy”. As common as this is, we don’t often think about the deeper issues of

The amount of water that goes into producing one loaf of bread is about 1,125 litres. In New Zealand, along with the rest of the world, there is a strain on our freshwater supplies. This emphasizes the impact of throwing out food, considering that 5000 litres of water are used to make 1 kg of cheese. Globally, developed countries produce enough food to feed

the world’s entire population. It is only in developed countries that most food waste occurs after consumers have bought their produce.

The excess food that ends up in landfill releases methane, which is a harmful greenhouse gas, damaging the environment. We are past the best time to step up and take action, but it is not too late.  If we all start taking positive steps in recognising and preventing food waste, we can begin reducing the amount of good food that is going to waste.

Has Libby’s article got you thinking? Keep an eye out for her next story which discusses and suggests ways you can take positive action in reducing and eliminating food waste.