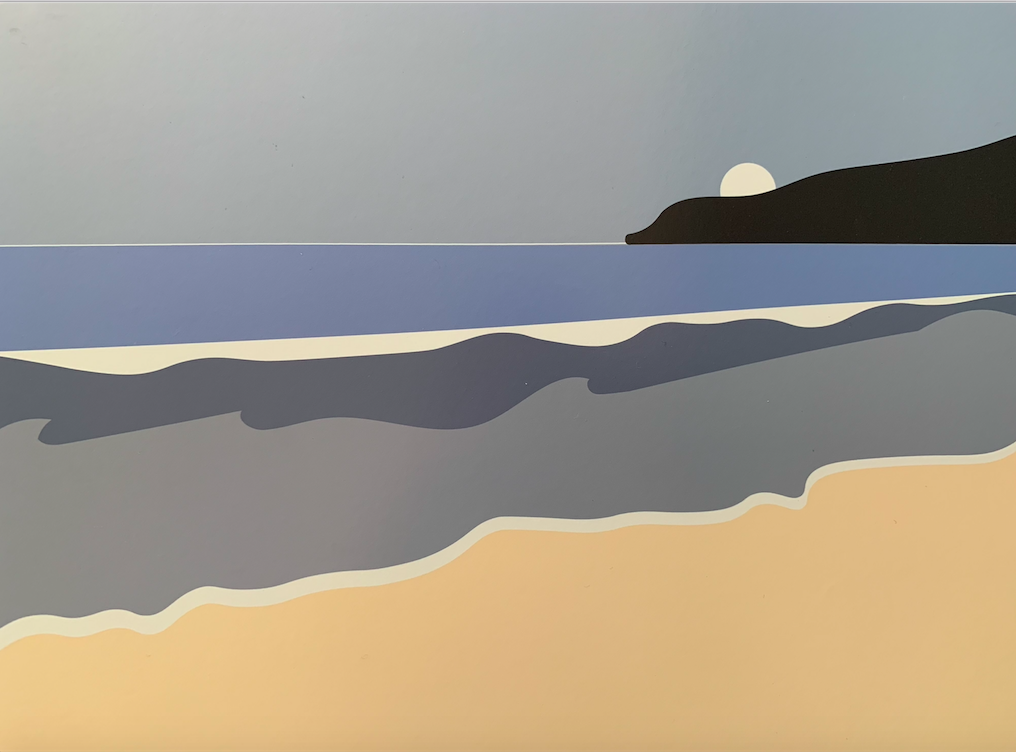 Banks Peninsula is scattered with hidden gems. Small villages concealed in the crevasses of each bay around the peninsula. Barren beaches with rocky cliffs hanging above your head. Water as clear as glass, smooth and calm.

A one and a half hour drive through the scenic landscapes of Canterbury, the drive to Akaroa takes you through numerous sceneries, from the everlasting flatness of the plains to the winding hills before approaching the bay. A breathtaking view from the peak of the hill, Akaroa lays below as you begin to descend into the valley where you are whisked a world away.

Driving into Akaroa is like transporting yourself to a little village on the southern coast of France. The town sits on the eastern side of the harbour, settling itself on the coast of the peninsula. Its unique nature makes it the only French settlement in New Zealand and its rustic vibe certainly makes you feel like you’re walking the streets of a different country. Akaroa is Canterbury’s oldest town; The name Akaroa is Kāi Tahu Māori for “Long Harbour”, which would be spelled “Whangaroa” in standard Māori. It was founded in August 1840 by Captain Jean François Langlois, a coloniser from France.

It has been suggested that the French interest in New Zealand sped up the initial British decision to annex the country. There were worries of French colonisation after Captain Langlois signed the deed for Akaroa, so by the time the French settlers arrived, the Treaty of Waitangi had already been signed by the Crown and Maori Chiefs earlier that year. This in turn made it the only French settlement in New Zealand.

Speaking to local Hayley, from Akaroa Dolphins, gave us much insight regarding the unique nature of Akaroa as a township and community. She spoke about the Hector’s dolphin, informing us that Akaroa holds the largest concentrated population in the world. Hector’s dolphins are unique to the South Island and they only swim in up to 100m of water, so they are coastal marine mammals.

However, what we found most interesting was the unusual use of dogs on the dolphin spotting boats. Akaroa Dolphins employ four dogs that go out on the boats and spot the dolphins for the tour guides. This unique approach to dolphin spotting makes Akaroa appear even more quirky than it already is. Hayley proudly showed us Jed the Kelpie dog and told us how he’s had more than 180 puppies in his 3 years around the planet (busy boy).

Hayley also spoke about how Akaroa lies inside a volcanic crater rim, which makes Niko palms grow easily there due to the warmer climate. If you’re planning a trip away, whether that’s a day trip or a date with a friend, then Akaroa would be a memorable location to explore, even if you have stumbled across it before.
First stop would be the beautiful Hilltop Café just on the peak of the hill, looking down into the bay. Its breathtaking view is so incredibly picturesque that it’s hard to look at, as it seems surreal. When looking down, the bay hums a song of a busy harmonised community just waiting to be explored. The Hilltop Café offers warmth from the brisk outside, and serves authentic wood-fire pizza that fills the hard wooden rustic building up as well as your inner foodie. Once you’ve made your way down the hill you are greeted by Barry’s Bay Cheese Factory. It would be one of the quirky authentic places to stop by in Akaroa, having a wide display room showcasing the workers creating the cheese we all proudly indulge in. Taste testing is also strongly encouraged before buying and off cuts are incredibly cheap.

Once you’ve filled your boots up with cheese, make your way past the colourful boat sheds and grab a pic for the gram – they scream insta-worthy! If you’re looking for another insta-worthy picture, then I’d strongly suggest visiting the lighthouse. It’s a historic landmark that was moved in three parts from its original location, as it was nearly toppled over into the sea. Its unique white exterior and red painted trimmings are nothing short of French inspired, making for a beautiful place to sit and enjoy a takeaway coffee. Moving into the hub of the French inspired spot, it’s painted with the traditional blue, red and white flags, porches and hanging plants, taking you away to a quaint village. Every Saturday between the months October through till April, 9.30am- 1pm, they have a farmer’s market. Offering an abundance of home-grown produce, from lavender, fudge, jams, olives, and nuts – all the ingredients you need to go with your Barry’s Bay cheese!

As Akaroa produces a lot of their own produce, they even source their fish locally. A lot of their restaurants and cafes serve seafood inspired dishes, even their fish and chip store hits the spot! This is due to having salmon and mussel farms nearby, and a prime location for fishing as they head out and test the water PH levels every two weeks. Making sure it’s the cleanest and most well looked after bay is important! After all it is one of their main resources.

The prime spots to to eat lunch would be any one of the cafes and restaurants along the esplanade, as they not only offer great food, but an atmosphere that’s lit up by the sun and met by the view of the sea. If you’re looking for treats to take home from your short but sweet visit, I would suggest stopping at the famous fudge store, offering flavours like no other. From crème brulee, chocolate belgian to lavender, there’s a flavour that suits everyone! Akaroa provides a great day trip or a place to stay over the weekend. Its rustic French vibes will surely bring a relaxing ambience to your trip, and if that doesn’t, the warmer weather and the beautiful scenery will. It’s a place to relax and let go. It’s a place to explore and have fun! And it’s a place to immerse yourself in that feels a world away.

Keeping the Youth in the game – How are the youth of today becoming...

The Brothers Green – The Future of Hemp in New Zealand.