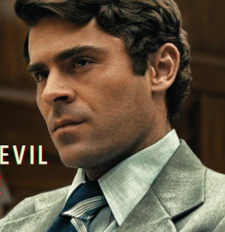 When you hear the name Zac Efron, the first thoughts that may come to mind are likely about High School Musical’s Troy Bolton, or maybe his unbelievable abs. Well, his days of being a Disney heartthrob are well and truly behind him as he portrays Ted Bundy, the infamous serial killer, in Netflix’s latest creation, Extremely Wicked, Shockingly Evil and Vile.

Zac Efron accurately portrays the characteristics associated with Ted Bundy, including being a charming and charismatic man on the surface, while hiding behind the mask a man who manipulates and commits heinous crimes against women.

What makes true crime stories like this one so fascinating is being let into the minds and personal lives of criminals, allowing the audience to draw connections with the evil crimes they commit. This film makes it difficult to pinpoint where exactly Ted went wrong in his life and became a serial killer especially due to his deceptively ordinary nature.

Lily Collins plays another lead role in this film, portraying Ted’s girlfriend, Liz Kendall. Their relationship appears happy and despite Liz’s initial scepticism over the allegations made against Ted, she is supportive of him and believes that he is innocent.

However, Ted’s facade of innocence begins to further crack once the evidence starts stacking up against him. In particular, evidence of a bite mark on one of his victims arises and implicates Ted as it shares similarities with the structure of his teeth. As a result, Liz finally reaches a point of clarity and distances herself from Ted. The emotional turmoil she faces around the truth behind Ted’s crimes is evident in her gaunt and deteriorating physical appearance.

There is also heavy focus placed on Ted’s journey of being his own attorney, something he was surprisingly very skilled at. Although he was unsuccessful in proving himself innocent, he was still able to fight hard to sway the minds of the jury.

A moment that highlights Ted’s deceptive nature is when he plots his own escape from court, formulating a plan to get himself alone in a room and jump to his freedom down a second-story window. His intelligence truly shines in this moment, as we see him running down the street and disposing of any distinguishing clothing in an attempt to disguise himself. Although his escape is short-lived, it was fascinating watching his plan come to life.

The film holds an unimpressive 57% rating on Rotten Tomatoes, which is not completely surprising. For someone with little prior knowledge about Ted Bundy’s crimes, the film sets Ted’s character up in a negative light from the outset, which encourages a biased view of Ted before knowing him.

For example, when Liz wakes in the morning upon meeting Ted, the camera pans to the empty side of the bed next to her where Ted had been sleeping. It then quickly jumps to the empty cot where her daughter Molly sleeps. This encourages the viewer to believe that Ted had left and taken her daughter with him. However, the reality of the situation is quite comical, as Ted was in fact in the kitchen with her daughter cooking breakfast for them. This is in complete contrast to the expectation set up by the film.

Overall, I thoroughly enjoyed this film and would happily rate it an 8/10. I may have enjoyed it more than others because I didn’t go in with an extensive amount of prior knowledge about the Ted Bundy case and so I enjoyed learning more about this fascinating story. I also loved seeing Zac Efron take on a role that was so distant from any other role I’ve seen him in. He was intense and almost frightening in some places, but he still maintains that trademark charismatic nature and charm that everyone knows and loves him for.