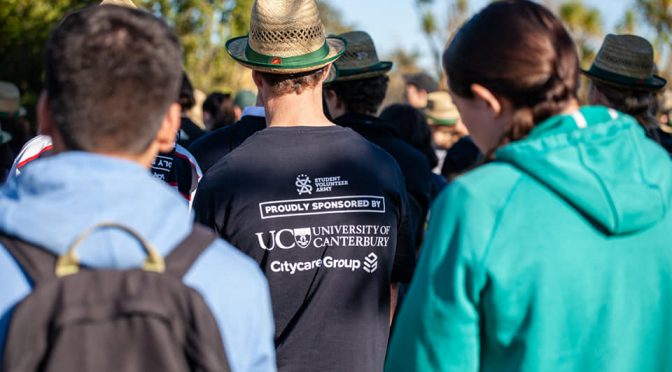 Ten years ago, before the February 22nd earthquakes in Ōtautahi-Christchurch, very few would have predicted the youth volunteer movement that was to arise. A massive UC student movement began with those earthquakes, and ten years on, this community spirit remains.

On Saturday the 13th of March, hundreds of students from the University of Canterbury got up early to a beautiful sunny day for the UC Student Volunteer Army’s largest event of the year. The UC SVA hosted its fifth annual Big Give, clocking in well over 1000 volunteer hours over eight projects in the Ōtautahi-Christchurch Red Zone. Our students worked alongside local community groups, including Cultivate Christchurch, Greening the Red Zone and Avon-Ōtākaro Forest Park. Students spent the morning weeding, mulching and planting as well as collecting rubble around the east side of Christchurch.

Zane, a ranger from the Christchurch city Council managing one project, remarked that the work that the Student Volunteer Army had done in one day would have taken their team approximately a week. Looking at the piles of rubble the volunteers collected, there looked to be about three tonnes. But it was more than that! The rubble collected had been sitting there for ten years, and still this area is used for morning strolls, dog walking, and recreation. So while it may have seemed small at the time, picking up leftover rubble meant a lot to local residents. It was a reminder that others still care, and the community rebuilding process is still underway.

We could feel the passion of the community group leaders spread among our volunteers as they told their stories. Many have big plans for the areas. The Avon-Ōtākaro Forest Park group is one such group, showing volunteers their vision for the future of Brooker Reserve. They hope to make Ōtautahi a National Park City, with native habitats intertwined between residential areas, to create a wildlife corridor and promote biodiversity. Their enthusiasm has left many volunteers wanting to stay involved in this vision.

Our volunteers undoubtedly enjoyed the day, with one telling us how cool it was to see the progress made since last year’s Big Give in the Red Zone. Another loved seeing everyone getting involved and putting their heart and soul into cleaning up Christchurch. Their ability to work well with strangers and take away new friendships continues to amaze us, and it is awesome seeing so many new faces.

After the volunteer work was completed, a free barbeque lunch and live concert was hosted for the well deserving students. Lunar Intruder, Too Woke for Toast, and Cake and Eat it performed thanks to our partner TuneSoc. It was a wholesome way to top off a very productive day.

President Luke Burke noted that “while the turnout wasn’t looking as strong leading up to it as in previous years, we managed to rally around four hundred volunteers. That was even after pushing the event back a week. It was still a lot of hands, over 1000 man-hours of work, and we achieved everything we set out to do for the community”.

Our 2021 Big Give has given us hope for the future of UC volunteering. Many students chip in during crises; we know this from the earthquake movement and our latest COVID-19 response. However, what is inspiring is that further on, even ten years after a crisis, the drive to contribute to a growing community is ingrained among us. We are pleased to know volunteering is alive, and holds strong in the hearts of many UC students. With a Student Volunteer Army like ours, it is exciting to think of the difference we can make for the future of Ōtautahi-Christchurch. The Events team is looking for friendly, inviting, charismatic staff volunteers to welcome new students and their whānau to the UC community, creating a sense of belonging and helping them get their bearings on their first day.

From Supplier of Smiles to Information Guru, there is an opportunity for you to be part of O Day. If you are interested, please review the roles, check with your manager and sign up by Friday 12 February 2021. Please note you will need to commit to attending the Event Briefing on Wednesday 17 February 2021.

Supplier of Smiles
You have a great smile and enjoy making people happy. We want you on the O Day trails to warmly welcome our visitors to UC.

Information Guru
Providing help and answering questions is your gig. You know campus well and can point people in the right direction (or point them to someone who can!)

Session Greeter
You’re there to scan people into sessions, all the while being that friendly face on their first day.

Data Gatherer
You’ll happily ask people what they think. iPad in hand, we need you to approach attendees with a smile to get their feedback on O Day.

Campus Explorer
You know the campus well and can’t wait to show it off. We need you to take small groups of visitors on a loop of the campus, pointing out all the key buildings and facilities.

Volunteer now or email the Events team if you have any questions.

Herea tō waka: The phrase ‘herea tō waka’ means ‘tie up your waka’ and is a reference to what we do when our waka (sailing vessel) comes into landing – we tie it firmly to the shore so that it doesn’t drift away.

For our students and that arrive here at UC and particularly on their first day (O Day), they are metaphorically tying their waka to the shoreline that is UC to ensure their grounding here is firm.