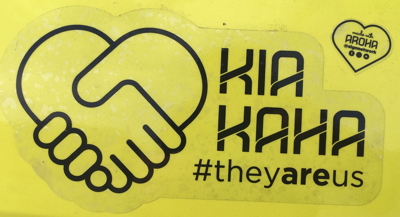 If I didn’t already know that te reo has international saliency I certainly was reminded of it when my visiting Scottish niece and her friend took themselves off to the tattoo parlour the day after they arrived at my place.

The two 19 year olds are on their gap year and have been in New Zealand at my sister’s place during the coronavirus lockdown. Before they’d left home they’d planned on getting tattoos as part of memoralising what turned out to be an even more life-changing event than they’d planned. And what did they want for their tattoos? Māori words: one chose ‘kia ora’ for her inside upper arm

and the other had ‘aroha’ etched on her thigh. When I asked them why they had chosen Māori words to commemorate their New Zealand trip they said that te reo was “representative” of New Zealand. Even to these kōtuku rerenga tahi te reo is iconic to New Zealand identity. It’s likely that during lockdown they were exposed to images like this featuring Jacinda Ardern.

And you know that the Māori language has iconic status when the phrase “kia kaha” has its own Wikipedia page.

This got me thinking about the value of te reo to NZ Inc. Government reports have been written about how much value te reo adds to our tourist income and to branding goods such as Tohu wine and Miraka dairy products. So if te reo adds value to our identity in Aotearoa, how much do we value te reo?

Some of the changing attitudes towards Māori language have been seen during this last week with the #BlackLivesMatter protests in New Zealand. Along with debate about statues there have been renewed calls for places like the city of Hamilton to be known by its Māori name, Kirikiriroa. Along with that, people are pointing out, perhaps to less deaf ears this time, the impact of living in townships where a myriad of street names commemorate people who represent the violent colonising forces (like Von Tempsky and Grey), rather than our Indigenous forebears.

Anyone who has been schooled in New Zealand since 1999 when Hinewehi’s rendition of the national anthem solely in Māori rocked the country, is likely to know some Māori waiata, greetings, colours, parts of the body, etc. Research on which I am working at present shows that young people’s knowledge of the meanings of Māori words is increasing over time. This positive picture is in contrast to my previous post about negative perceptions of te reo (responding to an older Pākehā man) and reflects a generational shift (in this post referring to my young female niece and her friend).

But knowing single words isn’t the same as being able to speak a language. And Aotearoans are increasingly up for that challenge. Te reo is undergoing an upsurge of interest – the numbers of adults learning the language has risen by over 30% in recent years. At UC our increased numbers include many staff from various parts of the campus who are keen to become proficient speakers.

In 2018 the government set a goal of having 1 million speakers of te reo by 2040 – and when it was set that goal looked aspirational, but … just maybe, it’s looking achievable. Mēnā ka titiro tātou ki te mana o te reo me whakamana hoki tātou i tēnei taonga – akona, kōrerotia!