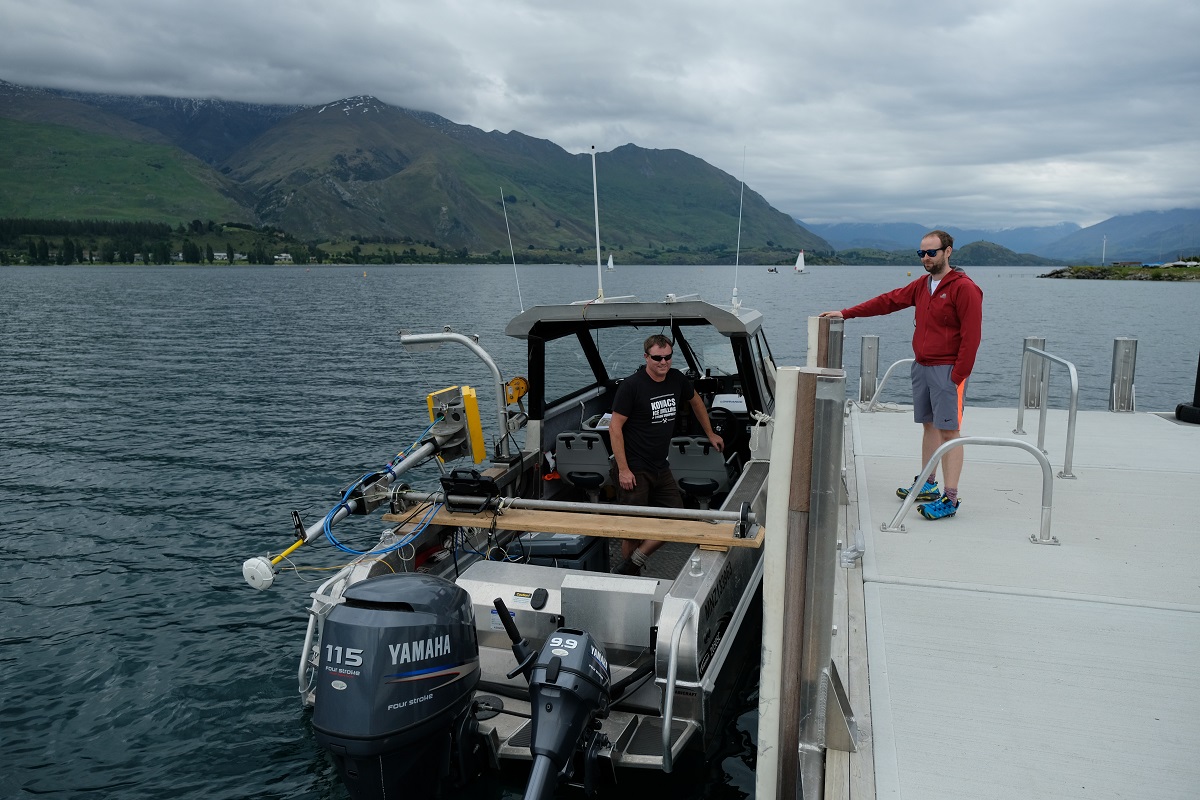 University of Canterbury geography technicians Nick Key and Justin Harrison, along with Newcastle University PhD candidate Ryan Dick have been conducting a detailed bathymetric survey of Lake Wanaka as part of a joint study between Newcastle and UC. The team managed to strike the weather lucky and get six continuous days of surveying on the lake, looking to see how the dynamic landscape seen above the water develops in depths (in places over 300m) below the waterline.

Matching survey lines and dodging obstacles is a challenging task. In order to maintain safety and ensure the most efficient use of time, the captain’s console included live data from the on-board Lowrance chart plotter, satellite imagery via iPad, and a continuous data stream from the Bathyswath system. Data from the bathymetric system is collected up to 300m either side of the vessel in a single pass, vastly improving resolution and efficiency over single beam echo sounder systems. A consequence of this large range, is the need for a number of additional sensors to be integrated including survey grade GPS, Inertial Motion Unit (measuring pitch roll and heave) and a high accuracy heading sensor. Over 60Gb of data were collected over the 6 days, with preliminary analysis showing promising details of channels etched into the lake bottom, prograding river deltas, steep rocky bluffs and other features of interest. Ryan will continue analysis of the data over the coming months, with input from his main supervisor Dr Stuart Dunning, and UC expert in glacial landforms and processes, Dr Heather Purdie. While the weather was mostly kind, and at times mirror calm during the data collection, the final day reminded the team of how changeable and tricky New Zealand conditions can be, when a westerly wind kicked up which had not appeared in any of the forecasts. Ever alert, skipper Nick Key spotted a line of white caps heading in the direction of the survey team. The lake went from flat calm to sharp 1.2m choppy waves in a matter of minutes, resulting in a hasty pack down of the gear and an exhilarating, if rather bumpy, trip back to the boat ramp. The Geography department survey vessel, Muritai performed spectacularly well, both with the long slow surveying days, and when conditions became challenging. It is hoped this is the first of many future collaborations between the two universities.