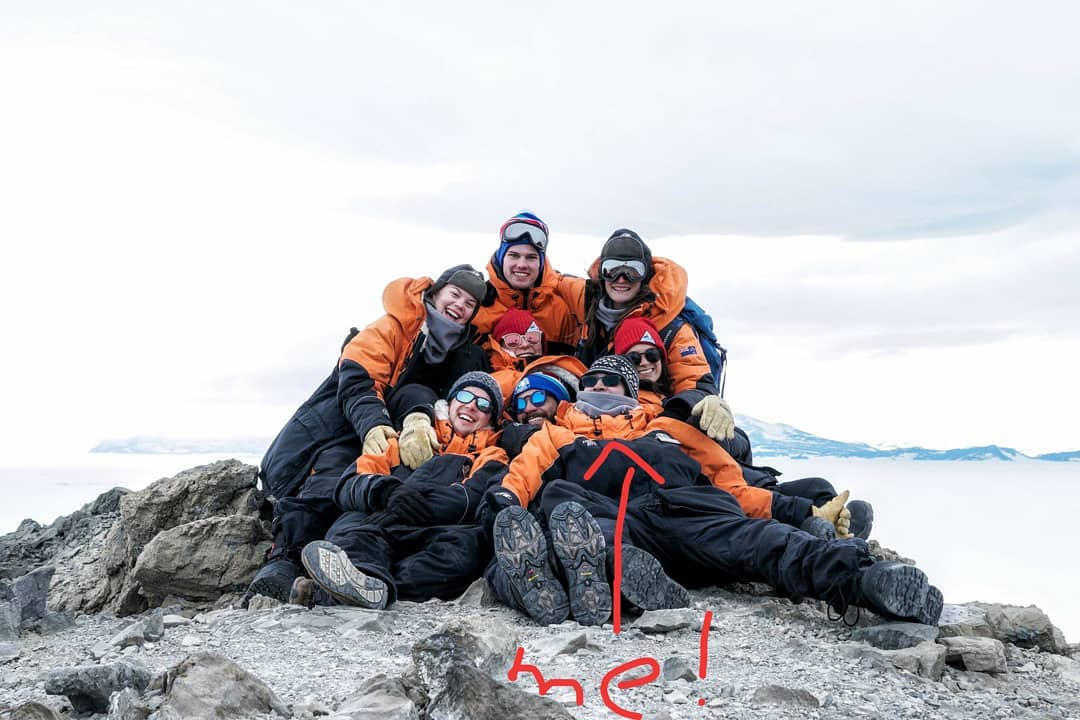 We were flown down to the ice in a USAF ski modified Hercules aircraft (LC130), or ski-herc for short. The flight time was about 9 hours, and an hour and a half before landing we began passing over the Transantarctic Mountains! After landing, we were driven to Scott Base and given an orientation tour, dinner, and a warm bed. The next day, we took the hagglunds out to Windless Bight on the Ross Ice Shelf. The weather was less than ideal when we began setting up camp, but it began to clear towards the end of the day giving us a stunning view of Mount Erebus in the distance… The day after we set up camp, we got up bright and early and split into two groups. One lot of us went to climb up Castle Rock while the others explored the pressure ridges around Scott Base. The climb was wonderfully refreshing, and we all had an exciting time. The next day, the groups swapped around, and I got a chance to spend some time with the adorable Weddell Seals out on the pressure ridges by Scott Base. We spent a few hours checking for tags and identifiable markings as part of an ongoing field project. After we had completed the seal survey, we drove round the corner to visit McMurdo Station and Scott’s Discovery Hut. Built during the 1901-1904 Discovery Expedition, the hut is kept in good shape by the Antarctic Heritage Trust. Inside the hut well preserved relics give us a glimpse into the past, back to an age long gone. On our 5th day on the ice shelf, we began digging snow pits for a report on glaciology. We shovelled and sawed our way two metres deep into the snow and ice, recording the differences between each layer along the way. It was a tough day, but also a rewarding one. Once we had all the data we needed, several of us dug further into the walls to create ice caves and spent the night. They were surprisingly warm, and I definitely slept better here than in the tents! Sheltering from the wind at the bottom of the snow pits, we recorded the data for each layer of snow and ice. We didn’t have many tools while working in the snow pits, so we made do with what we had. Ice cream sticks and a spatula helped us collect the data we needed! Christmas day was full of excitement. The morning was spent opening gifts from each other, and in the afternoon Santa came riding on a hagglund to bring us food from Scott Base. The rest of the day included lots of strange activities including snowga (snow yoga) and going running in our clunky boots. We even managed to get our lecturer to pull four of us along on a sled. The day after Christmas we returned to Scott Base and were given freedom to enjoy Antarctica. I decided to spend more time on the pressure ridges with the seals, and was not disappointed! A group of us left to go on a hike up Observation Hill around 9pm on our last day at Scott Base. This is a picture of Mount Discovery (a stratovolcano) taken from the top of Ob Hill sometime near midnight. I am extremely grateful to UC Science for allowing me to share the experience of PCAS with all of you, and I hope you have enjoyed it!

For more information on the Postgraduate Certificate in Antarctica Studies, visit https://www.canterbury.ac.nz/science/schools-and-departments/antarctica/postgraduate-study/