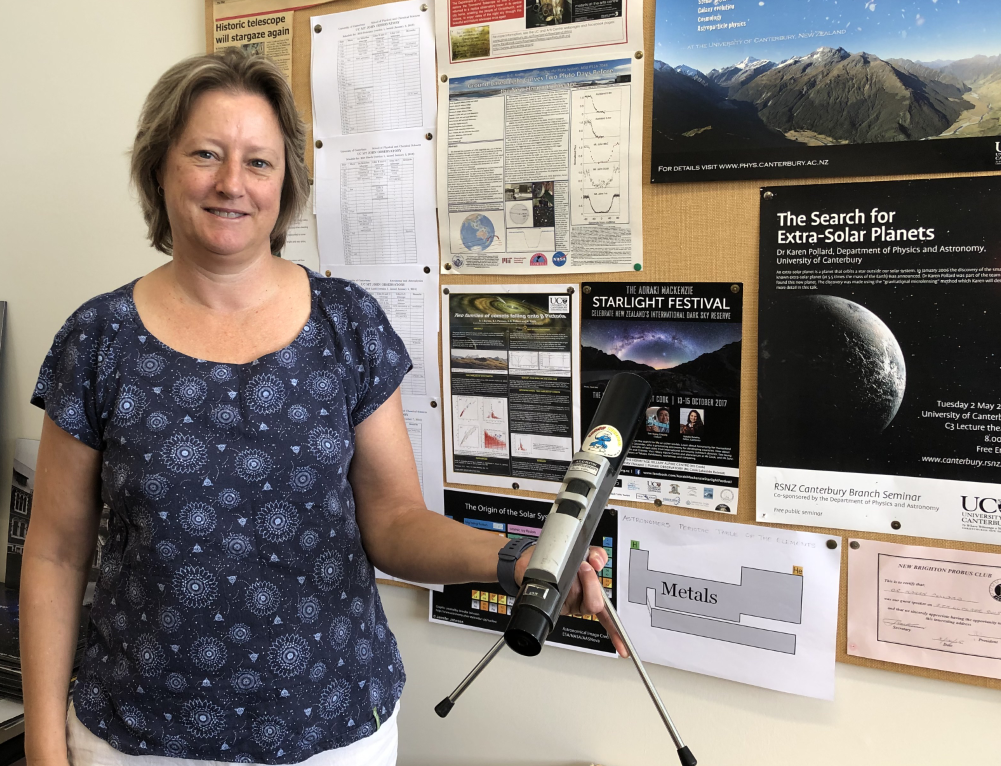 Karen started her astronomical journey at a young age. Born in Christchurch, New Zealand, Karen has lived here for most of her life. She was a creative child who loved reading fantasy, sci-fi and astronomy books, doing art, playing the recorder, writing stories, and doing math. Being very inspired by reading books about astronomy, Karen wanted to be an astronaut right from an early age. Even though she has motion sickness, she still aspired to do science as a career!

When she was about nine years old, Karen wanted a telescope and asked her parents about getting one. Her wish was granted and she got a little telescope in her stocking for Christmas, that her parents had found at a garage sale. Karen was thrilled with her telescope and used it to observe objects like the moon, the naked-eye planets: Jupiter and its moons, Saturn and its rings, star clusters like Omega Centauri, and even binary stars like Alpha Centauri! Once, she even got up at 4am (and got her family up too) to observe Halley’s Comet.

Throughout the rest of her childhood and teenage years, Karen had plenty of astronomical influences to keep her inspired and motivated. For instance, during her childhood/teenage years, the Voyager I and II spacecraft were travelling through the solar system, and she pinned several posters of the Voyager images all over her bedroom.

In addition, she was fascinated and inspired by Carl Sagan’s TV series ‘Cosmos: A Personal Voyage’ and the BBC radio show ‘The Hitch-Hikers Guide to the Galaxy’, which motivated her and inspired her passion in astronomy, and space in general.

“The cosmos is also within us. We’re made of star stuff. We are a way for the cosmos to know itself.” – Carl Sagan

At high school, Karen was not just enjoying her studies in science, maths and writing, she was also very involved in her school community and participated in a lot of sports. She was in the first teams for athletics, cross-country, road racing, soccer, basketball and cricket. After high school, Karen decided to study towards an engineering intermediate degree at the University of Canterbury (UC) because she enjoyed physics, maths and chemistry and wanted to keep her options open.

Karen was a bright student, and passionate about her studies. After her first year of university, she was invited to do an accelerated Physics/Chemistry Honours degree. She chose Physics (even though she also enjoyed and was good at Chemistry) and graduated with her Bachelors of Science with Honours degree in Physics in 1988. She won a scholarship during her summer vacation from 1987 – 1988, and travelled to the Australian National University in Canberra, Australia. There, with two professional infrared astronomers, she worked on a stellar project at Siding Springs Observatory, New South Wales for a few weeks.

Karen started her PhD in Astronomy in 1989, studying R Coronae Borealis and RV Tauri variables (some unusual supergiant stars), and got to do a lot of observing at the University of Canterbury’s Mt John Observatory. Her classmate from her undergraduate days, Michael Albrow, was also doing a PhD in Astronomy, where his project was modelling Type I Cepheid stars. During their PhD, Karen and Michael got married.

When Karen and Michael got to Cape Town in 1995, they found it a different environment from New Zealand, yet enjoyed it a lot. For her post-doctorate research, Karen used the SAAO telescope infrared equipment to study the dust environments around evolved stars that experienced mass loss.

During their time in Cape Town, Karen, Michael, and two SAAO astronomers founded the Probing Lensing Anomalies NETwork (PLANET), a new worldwide collaboration. PLANET aimed to employ a network of telescopes around the world—in Chile, Australia and South Africa, to undertake intensive photometric observations of microlensing events to search for extrasolar planets. This collaboration started in 1995 and has been continued since! Karen left in 2010 to pursue other research, however PLANET is still successfully ongoing.

Around the same time in 1995, Karen also worked with MACHO, another microlensing collaboration similar to PLANET, in search of dark matter instead of extrasolar planets. She searched MACHO’s database of photometric data of the Large and Small Magellanic Clouds, in search of RV Tauri and Type II Cepheid stars (these are types of variable stars). At the time, it was unknown whether RV Tauri stars existed outside our galaxy. Karen discovered that these stars did indeed exist outside the Milky Way, because she found evidence of them in the Large Magellanic Cloud, a dwarf galaxy. She also found new star members of the Type II Cepheid class of variable stars. This was some leading-edge research: Karen had solved the problem which had plagued astronomers for several years!

The same year, Karen and Michael attended the historic conference in Florence, Italy, where the discovery of the first extrasolar planet around the star 51 Peg was announced! In 1996, they attended another conference in Paris, France, where Michael presented a paper on his research on Type I Cepheid star models, and Karen presented her work about finding RV Tauri stars in the Large Magellanic Cloud. Both their papers were highlighted in the conference summary by a distinguished professor from Harvard University, leading to more recognition of their work.

After Karen’s post-doc, Karen and Michael returned to New Zealand in 1997. Karen obtained another post-doctoral research fellowship while Michael became a co-PI on a funded research project, both at the Department of Physics at UC. Additionally, they brought with them a proposal from the Director of the SAAO for UC to collaborate with them on a new telescope project. This was the Southern African Large Telescope (SALT), planned to be an 11m telescope. The Vice-Chancellor of UC supported this collaboration and allocated research funds to design and build a high-resolution echelle spectrograph for the SALT telescope, which was successfully designed in 2005.

Three years later in 2000, Michael was offered another post-doctoral research fellowship at the Hubble Space Telescope Science Institute in Baltimore, USA. Karen describes how she drew a circle of reasonable commuting distance and applied for jobs within that radius. She was offered a position as an Assistant Professor in the Physics Department at Gettysburg College in Pennsylvania, where she taught astronomy and physics courses. The same year, Karen and Michael were both offered a position as lecturer in the Department of Physics and Astronomy at UC, and they split the position in half, i.e. they each had a half-time position.

They started their positions in June 2001, where Michael started his work full-time and Karen initially worked half-time so that she could remain flexible with her children. They have been working at UC ever since. A few years later in 2003, Karen organised a large international conference, the International Astronomical Union Symposium 193 on ‘Pulsating Stars in the Local Group’, which was quite successful.

Throughout this time, Karen and Michael continued their PLANET collaboration research, and even received a grant in 2005 allowing them to travel to make observations, and to present their results at conferences. The PLANET collaboration had some successful papers, including one about the discovery of a 5.5 Earth mass extrasolar planet discovered through microlensing in 2006; and another in 2012, that demonstrated (through statistics from several years’ worth of data) that every star in the galaxy has at the very least one planet. Karen and Michael were involved with both these papers.

In 2008, they took a sabbatical year in Europe, and worked with many collaborators. Karen wrote a proposal, ‘The Music of the Stars’, to use Mount John Observatory’s 1m telescope and the HERCULES spectrograph to do cutting-edge research on asteroseismology—determining the interior structure of stars by studying their tiny surface vibrations. During this time, she also became the Director of the Mount John Observatory.

With so much academic involvement, Dr Pollard leads a busy and active life. She teaches undergraduate astronomy, astrophysics and physics courses. Her typical work day involves a lot of teaching: giving lectures, overseeing tutorials and labs, and the usual administrative work at the University. She also supervises her graduate (Honours, Master’s and PhD) students, and spends a lot of time answering emails, writing proposals, reviewing and refereeing articles for several scientific journals; and meeting with her colleagues, collaborators, students and others.

As the Director of Mt John Observatory, Karen also handles admin work for the observatory. She goes over proposals submitted by fellow astronomers, researchers, students, and international collaborators; and allocates observation time at the telescopes and creates schedules. She even helps organise trips to Mt John for the UC Alumni Association, and the Elaine P. Snowden Astronomy School—an astronomy camp for enthusiastic Year 13s interested in pursuing a career in astronomy or space science—or even for her colleagues and collaborators.

Furthermore, Karen is a Councillor of the Royal Astronomical Society of New Zealand (RASNZ). She says that this role creates a point of contact between local astronomical societies and astronomy amateurs or enthusiasts—a nice link between amateurs and professionals. In the past she has been a member of various astronomical organisations, such as the International Astronomical Union, and the Royal Society Committee on Astronomical Sciences.

Apart from her many commitments, Karen also makes time to do her research. She often lets her graduate students help her with research, and she does a lot of collaborative work, often on an international scale. Karen finds the best way to do research is through collaboration, which is something that she enjoys a lot. She regularly attends a lot of conferences to present her scientific work, and has organised several conferences too. She also travels the world through visiting professorships and fellowships.

Karen’s research is very interesting and varied. She has studied and continues to research stellar variability, evolved pulsating stars, asteroseismology of pulsating stars, protoplanetary disks, planets around young stars, luminous blue variable stars, stellar atmospheric analysis, and the microlensing search for extrasolar planets. She is very passionate about what she has termed ‘The Music of the Stars’, which is the idea that through asteroseismology, we can study the pulsations or vibrations of stars (since many periodically swell and contract), and learn a lot about the nature of the star.

Outside of her academic work, Karen also leads a very active life, similar to her high school days. She does Tai Chi, which she had picked up at high school and continued as a university student, which she finds very calming and helpful to relax. After a brief break, she has recommenced her practice of Tai Chi again. She also does yoga, aerobics and swimming, and bikes to the university.

I asked Karen if she had any advice for women considering careers in STEM. She says that being able to balance work and life is very important. In addition, having a good support system enables one to have a balanced life. For example, she and her husband Michael Albrow support each other by being prepared to work the job half-time each, as well as dedicating time with family. This has helped both of them live a balanced life.

I am truly inspired by Dr Pollard’s work in astrophysics as a Woman in Astronomy, and wish her all the best for future endeavours and research! Many thanks to Dr Karen Pollard for this interview.

If you liked this article, please like and share! Also check out this article on my WordPress blog ‘The Wonders of the Cosmos’ at: https://awesomecosmos622671215.wordpress.com.