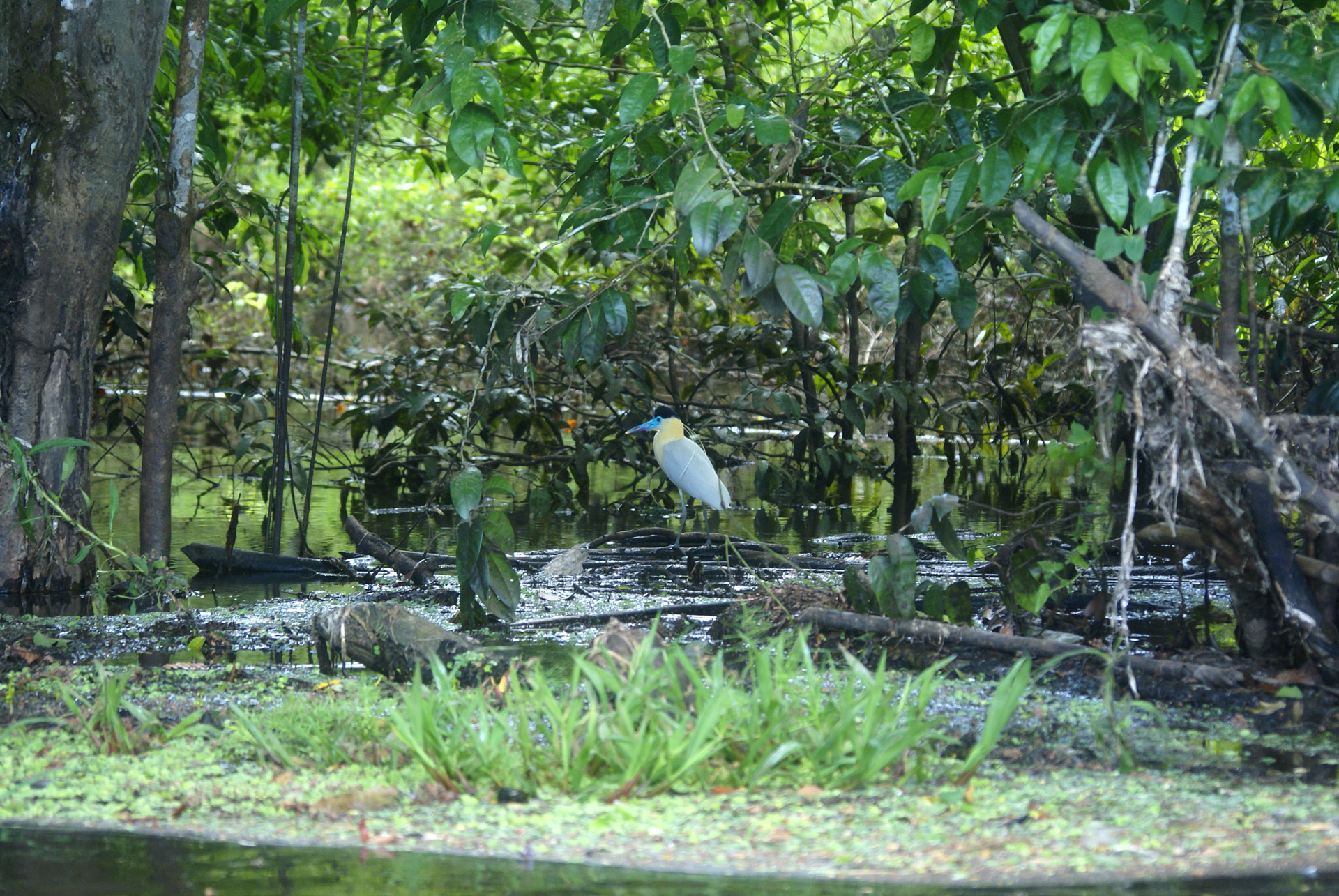 At the heart of the largest and most significant tropical rainforest on Earth lies the Amazon River. This river comprises of around 20% of the total global continental discharge to the ocean each year.

The Amazon’s flow is characterized by a large annual flood wave of around 10 m in amplitude, resulting primarily from distinctive tropical wet and dry seasons. Each year during the wet season between March and August, the Amazon rises and inundates its low lying floodplain forests, creating an internationally significant wetland ecosystem which remains flooded for several months and which reaches its maximum extent around June or July. Across the basin, the total wetland area is around 800,000 km2: nearly three times the size of New Zealand.

This is the Amazon River (Rio Solimões) in Brazil, around 1,200 km upstream from its outlet into the South Atlantic. In the picture above, the river is 6 km wide in the foreground.

In the study site in the central Amazon in Brazil, at the peak of the flood, the flow reaches about 120,000 metres cubed per second. That’s around 48 Olympic-size swimming pools passing along each second. The flow will more than double this before the river reaches the ocean. The river is so large that ocean-going ships can travel upstream more than 3,000 km, as far as Iquitos in Peru.

Wetland habitats in the Amazon basin

The extensive flow of surface water across the Amazon River floodplain is a critical factor in the functioning of the wetland habitats created by the Amazon’s flood wave. Inundation exerts a strong control on biological and biogeochemical processes of global significance, including ecosystem processes and the carbon cycle. While the annual flood-pulse is recognized to control the functioning of the floodplain forest its wetland ecosystem, the inter-annual variability in the flood level and flood wave timings creates spatial and temporal complexities which remain poorly quantified.

The floodplain contains a variety of habitats, including open lakes which may completely submerge floodplain vegetation…

… to extensive floodplain forests, which form important wetland habitats for thousands of species of plants, fish, birds, invertebrates and micro-organisms.

The rivers sustain people too, who commonly live along the edge of the rivers or lakes and are generally well adapted to the rise and fall of the water. Houses are often either raised up on stilts or are built on floating platforms. Their main form transport is by boat – there are few roads other than within and near small towns.

Over the last several years, together with colleagues in Brazil, the UK the USA, I have carried out research which assesses this wetland hydrodynamic variability, using a combination of field observations, remote sensing and hydrodynamic modelling. This includes the development of the first high resolution computer simulations of flow along a 300 km reach of the mainstem central Amazon River (Rio Solimões) in Brazil. To achieve this, we have conducted extensive fieldwork in order to measure mainstem and floodplain channel flow and bathymetry, suspended sediments and water chemistry.

In the picture above, we are deploying an Acoustic Doppler Current Profiler (ADCP) over the side of a boat – we use it to measure the flux of the water along the river channel. It works by sending out a sound signal, which are then reflected from particles such as sediment in the water. The Doppler effect allows a calculation of the speed of these particles past the instrument.

ADCP measurements and processing software allows a construction of a river transect, obtained by moving the boat across the river. Below, are shown outputs of measurements obtained on the Amazon River in the study site – the total flow is estimated at over 115,000 metres cubed per second.

Computer simulations are now being used to assess how flow varies within the floodplain over multiple decades, and how this may affect habitat availability. Our research will be presented at the forthcoming December meeting of the American Geophysical Union (AGU) in San Francisco.

Professor Matthew Wilson is the Director of the Geospatial Research Institute | Toi Hangarau and Professor in the School of Earth and Environment | Te Kura Aronukurangi at the University of Canterbury. He specialises in surface water hydrology, utilising numerical modelling, remote sensing and Geographical Information Systems, working in areas including flood risk and the impacts of climate change.